PTTGC plan under pressure from increased competition and market uncertainty

March 21, 2020 (IEEFA U.S.) – Plans to build a new petrochemical complex in Belmont County, Ohio face myriad market and other challenges, according to a report released today by the Institute for Energy Economics and Financial Analysis (IEEFA).

The project is to be undertaken by Thailand-based PTT Global Chemical (“PTTGC”) and Dailem of South Korea with funding from the state’s economic development arm.  PTTGC has delayed making a final decision on whether to move forward with the project but says it will do so by the end of June 2020. 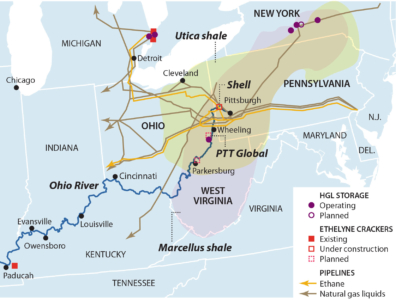 The IEEFA report, Proposed PTTGC Petrochemical Complex in Ohio Faces Significant Risks, questions whether the project will provide the anticipated jobs, tax revenues and other spinoff benefits to the State and the people of southeastern Ohio, as proponents claim. It is part of a larger plan to establish a second U.S. petrochemical hub in the Ohio River Valley, akin to the one situated along the U.S. Gulf Coast.

“The risks are becoming insurmountable. The price of plastics is sinking and the market is already oversupplied due to industry overbuilding and increased competition,” said Tom Sanzillo, IEEFA’s director of finance and author of the report.

The report identifies principal risks as:

Plastics prices today are 40% below the 2010-2013 period when the project was originally proposed. Weak prices will drive profit margins below investment targets.

Oversupply from a global industry-wide plastics buildout is likely to drive prices and revenues down. Supply/demand imbalances are likely to last through 2026.

Slower U.S. (and global) economic growth projections by the International Monetary Fund suggest a slowdown that will impact both volume and prices.

JobsOhio, the state’s privatized economic development arm, has provided $50 million in pre-development grants to PTTGC in the past two years as an incentive for the company to move forward with the full investment. The company estimates that construction will take 3½ years to complete.

“The question for decision makers who are looking to provide jobs, community revitalization and tax revenues for distressed communities is: will this project actually provide those benefits?” Sanzillo concluded.

The Institute for Energy Economics and Financial Analysis (IEEFA) conducts research and analyses on financial and economic issues related to energy and the environment. The Institute’s mission is to accelerate the transition to a diverse, sustainable and profitable energy economy. (www.ieefa.org)

The Thai company, PTTGC returned $20 million to the state of Ohio since they did not meet the deadline set forth in the agreement they made with the state years ago. They have not started construction